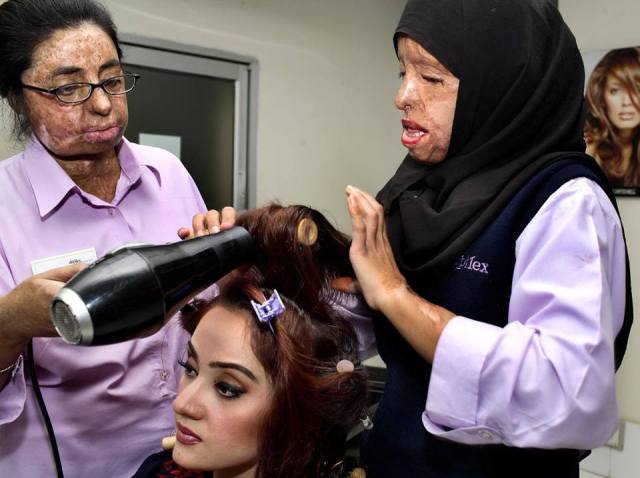 Pakistani salon owner Masarrat Misbah discovered a new life mission ten years ago when an acid attack survivor came to her salon and asked her for help to look better. “When she removed her veil, I had to sit down. There was no life in my legs,” Masarrat recalls in a recent BBC interview. “In front of me was a woman with no face. Her eyes and nose were gone and her neck and face were stuck together so she couldn’t move them.” Determined to help her, Masarrat found doctors to perform reconstructive surgery on the woman but her involvement didn’t stop there — she went on to start a non-profit organization called Smile Again which has helped hundreds of acid attack survivors rebuild their lives over the past ten years.

Masarrat has built one of the most respected salon chains in Pakistan and, since 2003, has not only funded the work of Smile Again but has turned her salons into refuges for women who have experienced such attacks. In addition to paying for their medical treatment, Massarat also teaches the women workplace skills and some have become beauticians at her salons. Two such women, pictured here, are Arooj Akbar, who was set on fire by her husband for giving birth to a girl rather than a boy, and Saira Liaqat, who had acid thrown on her by her then fiancé for refusing to leave her parents’ house.

At least 160 acid attacks have been reported this year alone in Pakistan but advocates believe the real number is much higher. Masarrat believes that the government needs to do more to prevent attacks and help the women affected, stating “Because it is a female-orientated issue, it comes right at the bottom of their [the government’s] priority list. Also, they say it tarnishes the image of our country. This is why it is hushed up and swept under the carpet.”

She adds, “You listen to their stories and the attackers are motivated by such small reasons, sometimes no reason at all, and you think, ‘Is this the world we want to live in?'” For her part, Masarrat is trying to build the kind of world she wants to see by helping one woman at a time rebuild their life.

An estimated 1,500 people, 80 percent of whom are women, are attacked with acid annually around the world. Those attacked are also overwhelmingly young women with an estimated 40 to 70% of the victims being under 18.

To learn more about Masarrat’s organization, visit the Depilex Smileagain Foundation (Official Fan Page) and how you can support its important work, visit http://www.depilexsmileagain.com/, or read more on the BBC at http://bbc.in/1tO9780

This photo is from Adrian Fisk Photography’s series “Pakistan’s Burnt Beauticians” — to view more of his photos, visit http://bit.ly/1wSKgiW

To learn more about acid attacks, check out the excellent 2012 Oscar-winning Best Documentary Short entitled “Saving Face” which tells the stories of Pakistani women who have become victims of such attacks. The film is digitally available on Amazon at http://amzn.to/1lPOIe6 or you can learn more about it at http://savingfacefilm.com/

For stories of girls and women experiencing and overcoming abuse and violence in their lives, visit our “Life Challenges” section at http://www.amightygirl.com/books/social-issues/abuse-violence

For more true stories of more inspiring girls and women who worked to change the world, visit our “Activist” section in Biographies at http://www.amightygirl.com/books/history-biography/biography?cat=207

To introduce children and teens to a young Pakistani activist who is working to make the world better for girls and women, we highly recommend Malala Yousafzai’s autobiography “I Am Malala” for ages 14 and up (http://www.amightygirl.com/i-am-malala) and the “I Am Malala” Young Readers Edition for ages 10 and up (http://www.amightygirl.com/i-am-malala-youth-edition).